Because of this the section thickness and hence over all weight of the component can be reduced considerably. Apart from this Duplex stainless steels also offer resistance to intergranular corrosion, erosion & abrasion; and its thermal expansion coefficient is intermediate between austenitic and carbon steel. The nominal compositions and mechanical properties of some duplex stainless steels are listed elsewhere. The experience of the welding duplex stainless steels shows that they have adequate weld-ability and the common welding processes being used are SMAW, GTAW & GMAW.

For welding these materials, nickel-rich matching compositions conforming to different AWS classifications are specified. But, nowhere the core wire to be used is specified. Therefore understanding its effect on weld metal is very much important. In this paper the influence of core wire variation on mechanical and corrosion properties of the weld metal are summarized.

As the purpose of the study, to investigate the effect of core wire chemistry, different batches were produced to meet E2209-16 class. Using these consumables all welds were prepared in 20 mm thick plates of IS: 2002 material with backing strip and 16 mm root gap. All these plates were buttered with three layers and beveled to 221⁄2o. The inter pass temperature was closely controlled with thermal chalks. [During welding, parameters used are shown in Table 1.] During preparation of weld coupons for both synthetic and non synthetic electrodes parameters are kept same to understand its effect on properties.

The chemical compositions of core wires used and their weld metals are shown in Table 2 and Table 3. All the weld metals were characterized for their microstructure with optical microscopy after preparing the metallographic finish using conventional mechanical polishing methods and etching in solution consists of 1 gram sodium meta-bi-sulphite, 20 ml concentrated HCL and 100 ml water. Rockwell hardness values of the weld metals were assessed with a 150Kgs load.

The ferrite content was estimated in terms of extended ferrite number using Fischer Feritscope. Impact testing was performed on 10x10x55 mm specimens with Charpy V-notch. Corrosion behavior of these weld metals was assessed by performing ASTM A262 Practice-C & ASTM G48A.

Weld metals produced with core wire A & B were studied. In weld metals with higher Creq / Nieq values, the ferrite to austenite transformation starts at lower temperatures and the equilibrium austenite content is also low, whereas in weld metals having lower Creq / Nieq values i.e., in weld metals enriched with austenite stabilizing elements such as Ni, N2, etc., transformation will start at much higher temperatures which helps the weld metal is achieving near equilibrium austenite level within the short duration for which it dwells at high temperatures. [Cr & Ni equivalents are evaluated using below formulae and tabulated in Table 6] [Also see: Fig. 1 Constant-iron (65%) section of Fe-Cr-Ni ternary diagram.]

To establish repeatability of the results we have tested three coupons in each weld metal. The tensile values of the different weld metals are presented in table 4. The synthetic weld metal ‘A’ has a value 807 MPa and %El: 30. Between the weld metals non synthetic weld metal has higher 826 MPa UTS and marginally less elongation percentage reported as 28. A closed look into observed hardness values shows that 20-23 RC. This implies that a higher proportion of ferrite does not necessarily mean a higher hardness. Therefore the phase balance with nitrogen equalizing the hardness.

Since both weld metals have good impact toughness properties, it was compared at two different temperatures namely +20o C & -30oC. The impact properties of both the weld metals were estimated and presented in table 4.

It is evident from presented values that the impact behaviour of the weld metals made with non synthetic is superior when compared to the other synthetic weld metal ‘A’. The inferior impact strength observed with weld metal produced with ‘A’ core wire attributed to its relatively higher ferrite content. Ferrite suffers from loss in toughness due its ductile – brittle transition behaviour. Another reason for loss in impact toughness in synthetic weld metal is to be ascribed to their inclusion content.

The corrosion behaviour of both the weld metals in ‘HNO3 solution and FeCl3 solution are presented in table-5. In the case of ferric chloride test, it was tested at two temperatures namely 22oC & 50oC. In all these tests we have carried out the tests twice with two specimens and taken average of the values. From the table it is evident that non synthetic weld metal weight loss is very less.

This can be attributed to less percentage of carbon and inclusion content. ASTM 262A Practice-C results also show that the mpy (mils per year) value is less for Non synthetic electrodes as compared to Synthetic electrodes.

(b) Minor variations in the chemistry and micro-constituents in the weld metals seem to have little influence on the hardness and elongation. 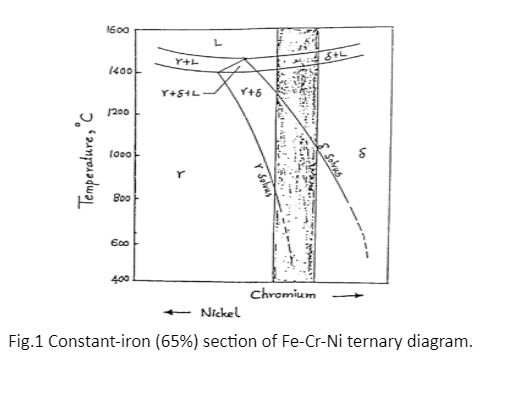 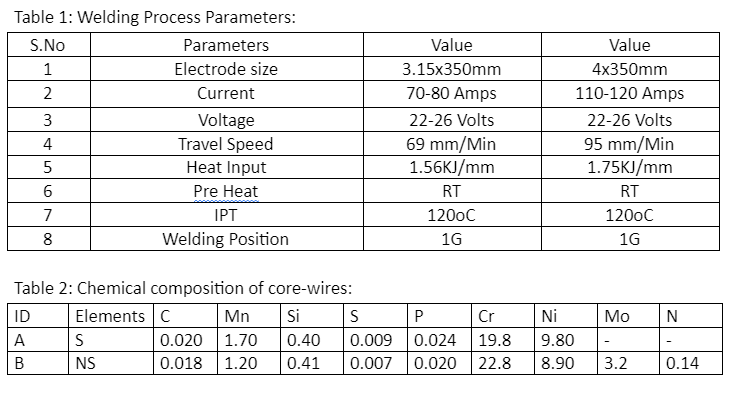 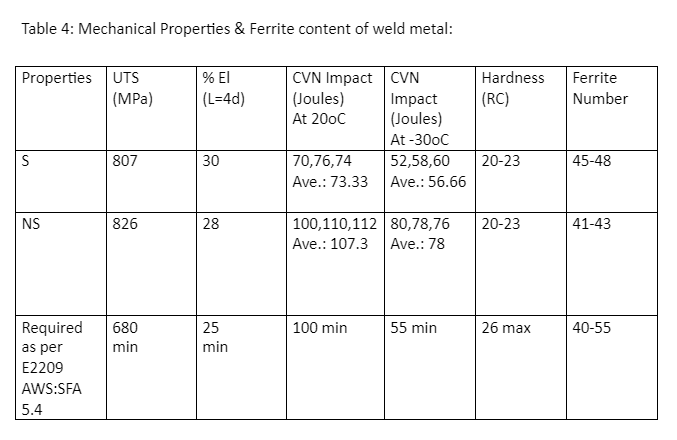